I Empower in order to Enchant,  Commanding Receptivity.
I seal the output of Timelessness with the Overtone tone of Radiance.
I am guided by the power of Spirit.
The Occult is a Pacal Votan Clear Sign:  Blue Solar Hand.  The G-Force is 12.3, Electric Human, which codes this 3rd Electric Moon.  Electric 10 is coded by the PSI of  Kin 40:  Magnetic Sun, which is also a Pacal Votan Clear Sign  🙂
Postulate 14.5:  “14.5. Stellar excitation is a registration of the life of higher analog functions of other stellar masses whose heliocosmic consciousness has advanced to super and subliminal consciousness.  Stellar excitations peak in moments of galactic synchronization: the subliminal conscious feedback of the galactic fifth force overtone stabilizes universal life at new plateaus between peak excitation crescendos. Stellar plateaus define different evolutionary epochs of planet and star system”.

GAMMA 10:  Pacify;  Third Eye:  “My lineage is the Union of intrinsic Awareness and the Ultimate Sphere.  I attain the Power of Peace.”  FRONT of Radion Cube.  TIME: _____ on LEFT of Cube for Codon 49. 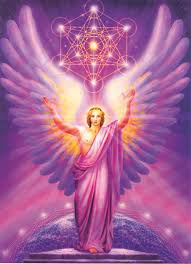 for this lovely image of an angelic Wizard, Overtoned by  the Sacred Cube, and   The Metatron’s Cube crop circle which appeared on August 1, 2007.  As revealed here, that day was Pacal Votan’s 27th Solar-Galactic Return, i.e., the 27th time his Solar Birthday (August 1) coincided with his Galactic Birthday, Kin 60;  Yellow Galactic Sun.

Pacal Votan’s current incarnation confirmed (while we were meeting at the Waitaha’s sacred grounds on the North Island) that he projected this Crop Circle through his AJNA!  He writes about it here:   http://www.lawoftime.org/pdfs/rinri-III-4-1.pdf.  Is this the analysis  you referred to , Kin 143?

This 58-year-old Malaysian (minus la-si=Mayan) astro-phsicist has been chosen to be the U.N.’s Ambassador tasked with greeting the first extra-terrestrials  to be officially recognized on Earth.   The numerical value of the letters of her prominently displayed name equals 138:  Galactic Mirror  🙂

The Galactic Mirror writing these words greatly appreciates your wonderful comments, which made Self-Existing Skywalker even more special.  🙂