I Channel in order to Create,  Inspiring Mind.
I seal the output of Vision with the Resonant tone of Attunment.
I am guided by the power of Accomplishment.
The G-Force for today is  Solar Earth, and the PSI for Self-Existing 23 is Lunar Dog.
Postulate 15.7:  “15.7. The collective radiosonic holon mass which is the fruit of the harmonic rearrangement of genetic order, operates through fifth force projective programs, displayed on the Dreamspell Oracle Board, which are genetically incorporated as central cortical program functions.

This link was sent by Kim, Kin 33 who knew that TMQ  worked for 9 years as a Flight Attendant for Trans World Airlines. The heat-seeking missile (which looked just like this one) that  downed TWA Flight 800 ‘launched‘ the beginning of TMQ’s truth ‘seeking‘ career.  (and the Flight Engineer on board the doomed flight had ‘babysat’ oUR Overtone Sun Jud (7th Solar Witness) and siblings the night before)

Mount Merapi;   http://notrickszone.com/2010/11/05/der-spiegel-geologists-warn-mega-eruption/  “Merapi is among the most dangerous volcanoes” “an unprecedented Magma reservoir lurks underneath it”…”three times more magma than what was ejected by the Indonesian volcano Tambora in 1815 – the biggest eruption in the last 10,000 years, which led to a cooling of the climate globally.” 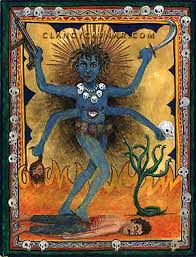 The Lady of Coromoto (an image of the Divine Feminine)was  discovered by Christine Kin 133 when she investigated the Antipode of erupting Mt. Merapi, which could be symbolized by the Kali image from Reimar Kin 143.  The Antipode of Mt. Merapi is  Guanare, the spiritual center of Venezuela.  What Reimar wrote can apply to both images:  “the Dark Mother is the ground from which the Maiden, Mother, and Crone faces of the Goddess, and all the ‘light-abled’ faces of existence which we call ‘the God’(and who is Her son), become possible. Furthermore, the fact that we can’t ‘see’ this ‘more than 90% Dark Matter/Energy’, affirms that Mystery/Darkness be once again honoured as the quintessential ‘face’ of the Divine – the wholism which is not only ‘more than the sum of its parts’, but whose overwhelming ‘more’ will always remain profoundly dark and mysterious, yet Mother to all that is not.”

Thank You Reimar Cosmic Night also,  for yoUR ABUNDANCE OF COSMIC information on Rhythmic Wizard  🙂  We’ll re view some of it on Galactic Warrior. considered one of Tibet’s most famous yogis and poets:  ” After his full realization, he travelled widely, giving teachings on mahāmudrā and other aspects of tantric Buddhism, often by means of his famous songs (100,000 songs!)  Milarepa from the 10th century  is mentioned many times in CHC VI:  Book of the Transcendence.  This volume is ordered into numbered paragraphs.  Number 23 in Chapter 1:

“Self-help books and programs, as well as positive slogans and affirmations are symptomatic of the universal URge to Transcend….The Yogi Milarepa is an outstanding example of one who was able to tame the lower forces and transcend.”

On this Self-Existing Lovers Reunion, may we all become more consciously Reunited with oUR higher 5th dimensional selves.