I pulse in order to enchant
realizing receptivity.
I seal the output of timelessness
with the solar tone of intention.
I am guided by the power of heart.
The G-Force is Kin 80:  Lunar Sun, and the PSI for Solar 2 [another way to express 2 Sun  :)] is PVCS Kin 26, Lunar World-Bridger.
Synchronistically, the Long Count is ‘the other PVCS World-Bridger’:  Cosmic World-Bridger.
Together, the Dreamspell/L.C. equals another Magic Turtle:  Solar Sun.
14.9:  “Radiosonic architecture, like the machine of the age of the technosphere, is a biogenically induced phenomenon, and takes on the host organism’s biological properties of multiplication and propagation. Regulated by T(E)=Art, the radiosonic architecture radializes the phenomenal world as solar coordinated pulsations of higher analog functions.”

The ‘ROOT‘ or core of oUR Earth is exhibiting unusual pressure.
http://theextinctionprotocol.wordpress.com/2011/03/08/lithospheric-fracturing-being-reported-across-the-globe/ 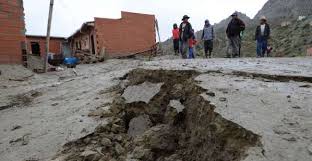 This article discusses fracturing of our Earth  at multiple locations.“Unexplained surface deformation of the planet should in itself alarm us especially when most of the events erupted with no reported accompanying episodes of seismic activity.  Lithospheric fracturing of the planet’s crust is another sign terrestrial tensile integrity is degrading.”
This Meditation utilizing  Crop Circles:  http://www.youtube.com/user/suzannelie#p/u/3/Rd9qFOmXLsM  is a good antidote for ‘rising above’  some of the recent terrestial news.
Thanks to Christine 133 for pointing out that yesterday’s  “date is discussed [in CHC II] as  “This final 42 year cycle began on March, 7, 1970, Kin 188, and ends in 2012.”  That means we just completed the 41st year of that cycle;  41 is known as the “Interval of God“.
During the Occult Watch of  Galactic Skywalker (coded by Kin 188:  Rhythmic Star) TMQ encountered Kate, who, as a school teacher has been making good use of the 13 Moon Calendar  18.8  had given her nearly 4 years ago.  Kate is cosmically coded by today’s Seal 14:  She is a Cosmic Wizard, Kin 234.
The synchronicites of Kate’s name and Seal, and Code=E’s mention that he was born on the Summer Solstice [actually the day prior] finally give the opportunity to share this story,  regarding the Kate who will marry a Prince who is a Resonant Wizard born on the Summer Solstice  🙂

It appears that Princess Diana would approve Prince William’s choice of W ife and Queen  http://nz.entertainment.yahoo.com/celebrity/opinions/show/2456430/in-the-gossip-mags/

Diana’s arch-rival, Camilla,  “sent the princess-to-be ‘into a state of fury’… Kate was reportedly outraged Camilla would dare use William’s late mother Princess Diana as an example of how not to behave.’
Kate chose April 29th as their wedding date because it’s the Feast Day of St. Catherine of Siena.

This is an auspicious choice of dates, because St. Catherine was coded by the same seal as Madame BlavatsKEY,  Crystal MonKEY, the KEY to unlocking the 2o12 Solstice. Their Wedding day on Planetary 26  is coded by Solar World-Bridger, which expresses the 13 Moon date for the Winter Solstice:  6.9 equals Moon 6, Day 9 = 12/21/2012.

May their union be blessed with joy, peace  and longevity  🙂

These synchronicities also caused TMQ to realize that TODAY is the Galactic RetURn of  Prince William, and of the Summer Solstice!   On his Wedding Day (6.9), the Prince in his Solar Wizard (14.9) year will be coded by Overtone Sun:  20.5, which codes the 7th Solar Witness, and the Heart Oracle of this year’s Lord of the Ring;  Single Wing Red Fire  🙂

Prince William enters his Planetary Storm year on the next Summer Solstice.  That Postulate [which follows Princess Diana’s Postulate:  19.9] describes what is currently unfolding, and culminating on the Winter Solstice 19 and 1/2 Moons later:

19.10:  “The Judgement Day sequence is  the Supreme Revelation of God.  The unconscious time of test and trial completed, the Dominion of Time unfolds as the triumph of the self-existing self-reflective revelation of the Divine Plan, and the expansion of planetary life into cosmic consciousness, according to the Law  T (E) = Art.“