White GALACTIC MIRROR
I harmonize in order to reflect
modeling order.
I seal the matrix of endlessness
with the galactic tone of integrity.
I am guided by the power of spirit.
HAPPpY Galactic Birthday

to Vladimir Vernadsky and to The Mystery Queen  🙂
Happy Solar Birthday to Kim  33!
Kin 138’s  Analog, Hunab Ku 21 is the G-Force of Kin 11:  Valum Votan.
Today’s G-Force is Kin 12:  Crystal Human.
21 x 21 = 441;  while 18 x 8 = 144, and 12 x 12 = 144.
Thus, ‘oUR 441–144 Cube of Truth codes this day’ that commemorates the end of Valum Votan’s Bardo, and the 1328th Anniversary of Pacal Votan’s Death.
1328 years ago [according to TMQ’s calculations] Valum Votan’s first incarnation:  Pacal Votan, left this plane on May 11, [5/11] 683 A.D. which was coded by Rhythmic  Mirror [18.6] .
TMQ’s hypothesis is supported by the fact that 5.11 and 18.6 are both Pacal Votan Clear Signs.
Pacal Votan left us the critical information about the 13 Moons of 28 Days in his elaborate Tomb, which was discovered 12:60 years after its Dedication in 692, and 13:20 years before 2012.
Today is another  example  of the precision of the timing of the Galactic Mayans  🙂
18.8:  “Mahabodhisattvas are angelic orders who choose galactic transmigration.  Bodhisattvic striving is ceaselessly directed toward limitless whole field realization of radiance and luminosity through the entire radially infinite mirror universe of infinite galactic brains and world systems.”

Galactic Mirror  Vladimir Vernadsky  investigated and theorized about the Noosphere and oUR power to interact and influence it.  In  his 1926 book  The Biosphere he hypothosythzed that life is the geological force that shapes the Earth.”
Thank You, Jio, for sending this  article, related to Vernadsky’s discoveries, and showing the degree to which we have the combine ability to change our Earth-and more  🙂  http://www.realitysandwich.com/node/97809;

“2012” and Electromagnetic Effects on Consciousness”

“…we are currently in the midst of a process involving the restructuring of our neuronal networks, and that the catalyst of this process is the high solar-geomagnetic activity whose consequences are feared by so many people today. However, all facts and findings add up to the undeniable conclusion that this evolution will for the first time in human history enable us human beings to use the enormous potential of our brains…”
” the atom is the smallest unit in the universe and the universe itself the largest, it is estimated that the universe contains a total of 1080 (10 to the 80th) atoms.  In other words, the number of interactions in the human brain far exceeds the number of atoms in the universe...”
Enjoy this  stunning  view of oUR Galaxy, which  Jannis, 7 Moon sent  for this ‘Galactic‘ day  🙂  http://media.skysurvey.org/interactive360/index.html

As you gaze at 189’s panoramic Galactic view, remember we will be at the Heart of oUR Galaxy at precisely 11:11 a.m. on 12/21/2012.
Another stunning example of the precision timing of the Galactic Mayans occurred on 8/1/2007, which was coded by Pacal Votan {Kin 60:  Galactic Sun} and by Valum Votan Kin 11, Spectral MonKEY in the Long Count.
TMQ calculated that this day was the 27th Solar-Galactic Return year of Pacal Votan.
Today is the 8th day of the Magnetic MonKEY Wavespell, and Aug. 1, 2007 was the 7th day of the Magnetic Monkey Moon. That was the first day of the first Cube Journey of the Lunar Wizard year. 7;   Cube One:  Memory
On that day, a Waitaha “People of Peace“ elder came from Valum Votan and Stephanie South’s home in Nelson, to TMQ’s home a few miles away.
During the  6 &1/2  hour visit with the Waitaha Kin, who spoke of Prophecy and Mana and many wonderful topics, Valum Votan {was in his words} projecting this crop circle through his Third Eye”  {as I’m waiting for the image to appear, the time is 11:11!} 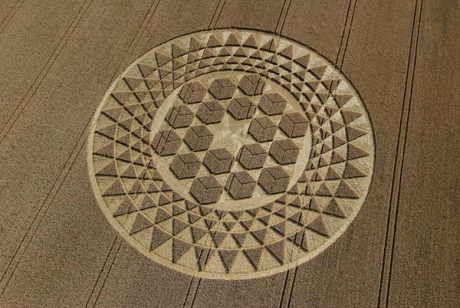 What a beautiful way to commemorate
Pacal Votan’s 27th Solar ‘Galactic Return’!
Valum Votan’s article about this crop circle discusses the 18 central cubes [their 3 sides each = 54, which codes the year], the 144 outer Cubes, and how the total Cubes equal 198,  Electric Mirror, which codes the Fifth Solar Witness and the 5th Lord of Time.
TMQ was Kin 198 on that day [60 + 138 = 198].  In 60 days, she begins her Electric Mirror year  🙂
Now, TMQ will spend the remaining hours of Galactic Mirror [till the day ends in Hawaii] enjoying all of yoUR wonderful comments, links, and videos  🙂
Thank You,  441 Cube of Truth Kin!
Pacal Votan’s most repeated phrase, and the final entry in Valum Votan’s  book of 260 Postulates:
19. 13:  “All is number.  God is a number.  God is in all.”