Red Planetary Dragon
I perfect in order to nurture, producing being.
I seal the input of birth with the planetary tone of manifestation.
I am guided by the power of universal water.

Today’s Hidden Power is Self-Existing Sun.  Velatropa 24, our Sun, which occupies the center of the far-flung Vela  zone of the Orion arm of our Galaxy has been very unusually active during this Fifth Mystic Moon:

http://www.sott.net/article/261874-4-huge-solar-flares-in-48-hours-Whats-going-on-with-the-sun .  This: http://www.sott.net/article/262045-Coronal-mass-ejection-and-radiation-storm-May-22-2013  states that “A solar radiation storm is in progress on May 22nd”  ” Everything we are and think is from the sun. But the sun itself is only receiving from the Hunab Ku, the One Supreme Source” [Valum Votan]

The Guide:  Kin 49:  Planetary Moon was literally demonstrated when an Asteroid from the Planet of Maldek [now the asteroid Belt]

crashed into the Moon while traveling 90,000 Km/H creating the largest explosion ever observed there.  The 20 meter wide crater created on Kin 33:  Resonant Skywalker yields the Synchronic Code number of 20::13 and 7.  The Long Count kin coding that day was 12 World-Bridger, so the combined Dreamspell and L.C. Kins combine  [13.7 + 6.12] to make 19.19  🙂  “Nineteen is over all“. http://www.livescience.com/34481-moon-crash-meteor-impact-explosion.html  Earth is currently traversing a dense area of the Asteroid Belt.  https://www.youtube.com/watch?v=zcuY65XQqfU&feature=player_embedded  Newly discovered Asteroid  2013 KB was within 640,000 miles of Earth for 4 days ending tomorrow.

There will be a Lunar Eclipse on Magic Turtle Spectral Wind, [tomorrow]  This is the first lunar eclipse of Saros series 150.[http://en.wikipedia.org/wiki/May_2013_lunar_eclipse

3 days later, an identical ‘perfect’ Rainbow appeared across the street from my new home, during the Guide Watch [Kin 150] of Resonant Mirror.  Just like the Rainbow in the photo, both ends were visible on the valley floor, although it was large enough to extend just above the hills behind.  [A rain shower while the sun was shining alerted me to look out the front windows]

Many others besides this writer are eagerly anticipating the first “Inter-Dimensional Signal” of 2013“.  Some are telepathically requesting that  the Circle-Makers place this Third Eye Mandala on a ‘friendly farmer’s field in Wiltshire England’.

There are precedents for that, including the “Day-out-of-Time Crop Circle” that appeared in 2006 after TMQ performed the DooT Meditation  [in which we were instructed by Valum Votan to ‘ask’ the Star People to place the Roerich Peace symbol in the fields].  TMQ did the meditation on Saturday July 22, and the next morning headlines said that the Day-out-of-Time Circle  had appeared 3 days early  🙂

This is one of many reasons that I continue to observe Saturday as Silio, the last day of the Week, Moon and 13 Moon year.  The last day of this 13 Moon year will be on Lunar Mirror, on the Gregorian date that perfectly incorporates the Synchronic code numbers: 7/20/13.

Just now, I realized that July 22 [the last day of the Cosmic Seed year] was coded by Kin 205:  Planetary Serpent, the same Kin [see prior blog] that was indicated in a variety of ways by the Flash Flood that  suddenly ‘uplifted’ me to the perfect place for Synchro-Galactic Yoga.

The  ‘counter-clock-wise’ 13 steps that lead to the grassy ‘figure 8‘-shaped’ plateau  at my new home remind me  of  Temple 13, which houses the Tomb of the Red Queen, and of the 13 Oxlahuntiki.  They are the  feminine counterpart to the 9 Bolontiku who ‘guard‘ Pacal Votan’s Tomb in the 9 storied Pyramid of Inscriptions.   The 13 steps are arranged like the 13 day Wavespell:  there is a broad landing  [which accomodates each turn] at the 4th and 9th step. 🙂

It take me 49 steps to walk its perimeter, and the wildly-fluctuating weather has ‘arranged’ a sunny period each morning for me to transduce each day’s plasmas with bare feet on [usually wet] grass.  Today, Friday, meant that “Plasma 6:  Limi:  Purification“ was being received  through the Vritis in my hands, and sent to the Earth’s core via my feet.

Since our Galactic Seed Galactic Synchronization is on Friday July 26th, here is a review of the Synchro-Galactic practice for that day [and for today, Spectral Limi 27]  LIMI Plasma gathers in our Solar Plexus [Manipura] Chakra.  [Quoted material is from Chapter 5;  CHC 6.]

“The energy stored in this Chakra can be used to connect us both individually and as a planet, through the Sun, to the Galactic core, Hunab Ku”  This feels appropriate for the day we are meant to “Synchronize with the Galaxy“.

After Natural Mind meditation, focus on your Solar Plexus, feel it radiating vibrant energy, which dissolves and transforms into a yellow 10-petaled lotus. “To awaken this chakra, breathe slowly into the Solar Plexus,”  while focusing on Purification.  “From this center, feel the Kuxan Suum as the etheric fiber that that flows directly to the center of the Galaxy.”  Manipura affirmation:  “May our perceptions be organized into a cosmic whole that we may all become one within the radialized order of the Primal Source!”  [to be continued]

We are nearing the end of the   Fifth Mystic Moon which is coded by Kin 206, White Spectral World-Bridger  , and the “Recollection of the Power of the Fifth day of Creation, “Spectral Death””

On the 18th [official 14th] day of the Spectral World-Bridger Moon, we entered the Fifth 36-day cycle, Cubing the Earth, the same day we began the  Human Wavespell [15 May 2013)

The next Wavespell of the Serpent contains the 10-in-a-row run of Galactic Activation Portals.  This is the Penultimate run of GAPS before our Galactic Synchronization, and an excellent time to practice our Telepathy.  S’ace 22 [with whom I experienced some telepathic pulses recently] sent this example of others who are consciously entering the telepathic realm:  http://www.stankovuniversallaw.com/2013/05/important-announcement-2/

As the back cover of CHC VI states:  “We are being called to turn inward, away from the cyber-world and into the vast realm of our mind-the ultimate supercomputer…”

The Analog of today’s Kin is Planetary Mirror, which coded the day that Pacal Votan’s Tomb was opened nearly 61 years ago.  Thanks to Valum Votan’s tiresless efforts to decode  the Tomb, we are now familiar  with and united by the Synchronic Codes and the Law of Time.  Today’s G-Force is GAP Kin 239:  Blue Overtone Storm.

19.5:  “The perfection of order of God is synchronically maintained by the universally ceaseless ratio of time,  13:20, and its functioning as the equation T{E}=Art, for which reason God is referred to as the Supreme Artist, the architect of the universe in all of its dimensional levels and orders of world systems.”

Kin 89: Spectral Moon in the Spectral World-Bridger Moon marks 3 Galactic Spins;  780 days since the passing of Valum Votan a.k.a. Jose Arguelles on March 23, 2011.

Page 146 of CHC VI:  Book of the Transcendence reminds us of the significance of that number:  “The frequency of Earth is 7.8 hertz, a fractal of 78, and also a fractal of 780, the number of days in the Martian synodic as viewed from Earth.  Seventy Eight is also the key in the decipherment [by Valum Votan] of the tomb of Pacal Votan;  seventy eight is the sum tonal frequency of the 13 tones carved on the sarcophagus lid”

Just hours before Kin 89 began, TMQ viewed a rented video of the modern remake of “Alice in Wonderland“.  Twice during the film, the date of March 23 was discussed, because it was the pivotal point in Alice’s life;  her father disappeared on March 23.  Of course, each mention of March 23 was a reminder of Valum Votan’s departure, on March 23.

That led to observing other synchronicities in this film.  For example, “The Stone of Wonderland” alpha-numerically equals 237, which means it numerically resonates with the following pertinent themes, all of which = 237:  Crystalline Ascension,  Sacred Radio-Genetic Time Ark, Telektonon Prophecy, Cosmic Consciousness;  GM 108X Alignment and the ‘Crown of Pure Radiance’, which is  The Noosphere.

This blog last appeared on Kin 39:  Cosmic Storm, and a ‘storm of events’ has prevented posting until now.  Some of the events included hosting a family of 5 for 5 days over the Easter Weekend [in New Zealand, Easter Friday and Easter Monday are holidays]   and serving as a nanny for  eleven 11–hour days for an adorable 5 year old boy [who is in his Cosmic Storm year  :)]

Then, 21 days ago, on Kin 68 [April 21], heavy rains culminated in a flash flood, when over 4 inches [104 mm.] of rain fell during the hour that spanned the 3 Mirror and 11 Skywalker watches of  Yellow Electric Star.  When I fled the house, water in the driveway was 4 feet deep.    The  Flash Flood very suddenly transported me from the house I had moved into on the first day of  Moon Kin 138 over 5 years ago [an e-mail from V.V. the following day was titled “Happy Galactic Mirror Moon‘  🙂] .

The “7:7::7:7 Telektonon Revelation” informs us that the “Fourth Mystic Moon of the Planetary Serpent” was associated with Codon 40:  “Heart’s Release” and Codon 48:  “Reaching the Source“ 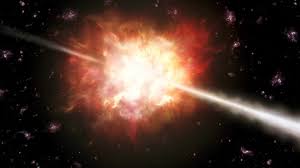 “Gamma-ray bursts, says NASA, “are the most luminous and mysterious explosions in the universe.” The blasts emit surges of gamma rays — the most powerful form of light — as well as X-rays, and they produce afterglows that can be observed at optical and radio energies. Two weeks ago, says NASA, astronomers saw the longest and brightest gamma-ray burst ever detected. It was the biggest shot of energy we’ve ever seen, streaming from the universe’s most powerful class of explosions. NASA: “We have waited a long time for a gamma-ray burst this shockingly, eye-wateringly bright,”  “The output from GRB 130427A was visible in gamma ray light for nearly half a day, while typical GRBs fade within a matter of minutes or hours”.

My new street number is 137 [7 Earth, which signifies the Earth’s Core, and it’s Mayan mediator of Plasmas from Hunab Ku] and the S.G.F. of the street name equals 79, number of the Noosphere Constant [520 – 441 = 79].  When we add in ‘Drive‘ for the full street name, it adds up to another  137  🙂 As indicated, this is the perfect place for  a “Cosmic Vibratory Root” to receive and transduce the radial plasmas to the core of the Earth.  I intend each morning, to descend 13 steps to a grassy plateau, through which the ‘vritis’ of my bare feet conduct the daily plasmas to “Lord Seven Earth” known to the Mayans as “Ah Vuc Ti Cab“.

205 is indicated in 4 ways by the numbers associated with the flash flood, and 205 can also signify 20.5 [Overtone Sun, which codes the Seventh Solar Witness]

Skyped me on Kin 65:  Cosmic Serpent, which was the first Galactic Return of his daughter, who was born on Pacal Votan’s 1,409th birthday {August 1, 2012}.   As a 21 year old, Jud won the 21st series of Survivor  Nicuaraga, and  now he will compete in the next Survivor series which is titled “Heroes and Villains”

Jud’s 7 weeks of filming  begins on  7/7/2013  🙂  Jud is well aware of the Galactic Synchronization that will take place during his 13:20 Natural Time sojourn at a locale “somewhere in Asia”

This has been a largely personal blog, to explain my long absence, and to celebrate the return of my internet connection and the original, easier WordPress format.

The next post will focus on oUR 2013 Galactic Seed Galactic Synchronization which is 75 days after the 3rd Galactic Anniversary of Valum Votan’s Ascension.  Perhaps there will also be a 2013 Crop Circle to discuss   🙂

May  each of You,  oUR Earth and all whom she supports be blessed with