Kin 66: White Magnetic World-Bridger and Mayan Kin 19: 6 Storm code the beginning of Wavespell Six and the Electric Moon of Service and Activation.

Today’s Dreamspell Kin is 66. Freedom and Lunar both a-n = 66.  During the Lunar BUTTERFLY Moon, Scotland’s bid for Freedom from the United Kingdom was called the BUTTERFLY Rebellion .

“And that has become what this campaign really is – Gordon Brown swinging his big, clunking fist at a thousand butterflies.  All grunt, no connection. Because that’s what we are – a thousand butterflies.  None of us is strong. …Britain is for the rich, Scotland can be ours.  We are a campaign held together with sticky tape and goodwill.  We’re all broke (we give all our money away). We’re all exhausted (we’ve haven’t rested in two years).  None of us is scared. None of us needs anyone’s permission. And we never underestimate the people of Scotland.  This is like nothing I’ve ever seen.  We have barely a single institution on our side, barely a newspaper, and damn few millionaires.  And they are truly petrified of us.  A butterfly rebellion is coming close to winning Scotland away from the forces of the British state.  I think we’ll do it, but either way, they can’t beat us. We are already half of Scotland and we keep growing. They are weak and we are strong.  When the people of Britain see their titans defeated by a rebel army who used infographics and humour, what is there to stop them following? England needs its butterfly rebellion as well…

You can’t beat a thousand butterflies with a gun. But you can beat a gun with a thousand butterflies”. http://bellacaledonia.org.uk/2014/09/14/the-butterfly-rebellion/     “Was Scotland’s Referendum – Fair Or Foul? Considerable doubts remain.”  http://www.theguardian.com/politics/2014/sep/19/russia-calls-foul-scottish-referendum   Though their 2 [Lunar] year bid for FREEDOM lost by a small margin, the Scots Butterfly Rebellion has set a FREEDOM initiative in motion, and others will follow their example.

The Electric Moon always begins of the 57th day of the 13 Moon year.  Hours after posting the PVCS 75 blog on 9/13 [here in New Zealand],  I read of 13 Shamans gathering in Siberia for 9 days of ceremonies that originated in prehistory.    Shamans from Peru, Greenland, South Korea, Mexico, Chile, Mongolia, Sweden, Belarus and Russia answered “The Call of 13 Shamans” which was timed to coincide with cosmic cycles http://www.sott.net/article/285608-Shamans-from-around-the-world-gather-in-Siberia-for-ceremony-timed-to-coincide-with-cosmic-cycles ”

“...The inner eye of the wisest shamans of Earth will open new horizons through communication with spirits, planets and stars of far Black Heaven (Cosmos), comprehension of the mysteries of the interaction of stars, planets and Mother Earth in modern times, and what to expect on our planet in the future,’ said the organisers in advance.”

9/13 was coded by PVCS 58: Rhythmic Mirror.   On that day, I also discovered a wonderful site by Galactic Wizard 34, whose daughter is coded by Rhythmic Mirror 🙂  Today is coded by Kin 19 in the Mayan count. 19.19 – 20.13 becomes 19.6: 6 Storm.  Galactic Wizard’s site displays his “19:19 Crystal Matrix 6th Dimensional Meditation Tool” 1919CrystalMatrixMeditation “ It contains and delivers prophecy, time and magic to the sub dimensional systems”. http://galacticwizard34.wordpress.com/2013/04/23/1919-crystal-matrix-6th-dimensional-meditation-tool/ Welcome to Galactic Wizard, the latest follower here 🙂

Last week on Galactic Sun, Kim Dotcom hosted the  “Moment of TRUTH” https://www.youtube.com/watch?v=Pbps1EwAW-0 http://www.commondreams.org/news/2014/09/15/snowden-if-you-live-new-zealand-you-are-being-watched  Dotcom’s amazing conference at the Auckland Town Hall included Glenn Greenwald and Dotcom’s lawyer in his fight against extradition to the U.S.  They [and two leaders from Dotcom’s Internet and Mana Party] were joined by Edward Snowden in Russia and Julian Assange at Ecuador’s London Embassy [where something was audibly tunneling below the Embassy].  Each participant gave a  brilliant presentation regarding spying, privacy abuses and more.  It was disturbing to see how adroitly the media hid and misrepresented the amazing truths they revealed that night, in a demonstration of how well-funded orchestration of propaganda trumped the TRUTH being presented by globally-recognized heroes of Freedom and Privacy.

That day of The Moment of TRUTH was also 10th Galactic Return of the August 1, 2007 Cube crop circle, which Valum Votan told me [face-to-face] that he created [during the time he and Stephanie and myself lived a few miles apart in Nelson New Zealand].

4 Galactic Spins [1040 days] after the ‘Cube Crop Circle‘ appeared, I shared in [the 6/7/10 blog] my conclusion that  Pacal Votan was born on August 1, 603, and that this formation appeared on Pacal Votan’s 27th Solar-Galactic Return [27 x 52 years].  2007 = 27, triple NINE, Pacal’s special number.  It seems perfect that Pacal’s later incarnation as Valum Votan Kin 11 created this “Inter-Dimensional Signal‘ [through his Third Eye [like the 13 Shamans mentioned above] on the day coded by Mayan Kin 11.

It’s interesting to note that the Lunar Moon of the year coded by 10.10 contained two 10th anniversaries:  10 Solar Spins [or years] since the 9/11/2004 message [in Synchronic Readout form stating that I was “Awakening to the Prophecy of the Red Queen“, etc.] and the 10th Galactic Spin since Valum Votan created the 8/1/2007 Cube Crop Circle [while a few miles away a Waitaha woman came straight from his house to mine to speak of Prophecy and plans for 5 hours]

The Kins that code the Moon and Wavespell that begin today [4.3 and 6.1] also equal a PVCS:  10.4: Self-Existing Dog.  The 10 and 4 also mirror the 4th and 10th Galactic Spins since the Crop Circle that memorialized the 27th Solar-Galactic Return since the Birth of Pacal Votan.  As the Postulate he repeats often in Telektonon states:  19.13:  “All is number.  God is a number.  God is in all.”

The Cosmic Turtle Calendar:  13 Moons of Harmony begins each Year and Moon  on Sunday:  DALI, and is aligned with the 7 day week [as Valum Votan wrote so many times and as shown on the learning tools:  The Telektonon and the 7:7::7:7].  To further distinguish it from the official 13 Moon Calendar that is aligned with the Gregorian Calendar, most of the Moons are being assigned a new Totem.  The Bat, totem for the Magnetic Moon was replaced by the Hummingbird, and the Lunar Scorpion became the Lunar Butterfly Moon.

The Deer is replaced by the Jellyfish as totem for the Electric Moon of Service and Activation. 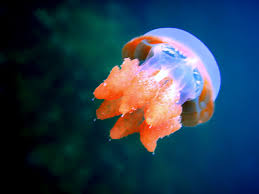 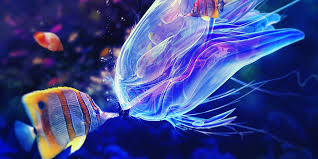 Jellyfish have been around for 1/2 to 3/4 billion years!  They have been of Service to  Humanity on several occasions in the last few years.

On 10/2/2013,  Moon Jellyfish closed the world’s largest nuclear plant…During the Electric Jellyfish Moon!! Staff at the Oskarshamn nuclear plant in Sweden had to close reactor number three on Sunday after hundreds of Moon Jellyfish entered and blocked the pipes that bring in cool water to the plant’s turbines“.

“And last year, staff at the California-based Diablo Canyon plant had to shut its reactor two after sea salp – a gelatinous, jellyfish-like organism – clogged pipes.” http://www.ibtimes.com/jellyfish-invade-four-nuclear-reactors-japan-israel-scotland-photos-707777 During the week of July 10, 2011, Jellyfish closed down 4 Nuclear Reactors; 2 in Scotland, and a Nuclear power plants in Japan and Israel“.

That was less than 4 months after the Fukushima Nuclear disaster, whose damage to Earth and all of her inhabitants continues to increase.  daily.http://themillenniumreport.com/2014/09/will-fukushima-become-an-extinction-level-event/ ” If the nations of the world really understood the implications of the actual ‘fallout’ – past, current and future – the current nuclear energy paradigm would be systematically shut down.” http://themillenniumreport.com/2014/09/the-pacific-ocean-is-dying/

Jellyfish are unique in 3 ways:  1:   They are the oldest multi-organ creatures on our planet; 2:   Jellyfish serve the earth in the unique  manner mentioned above; and:

3:  A Japanese jellyfish researcher says:  “Out of all the animals in the world, only Jellyfish are able to reverse the aging process instead of dying,” he said. “We really don’t know their lifespan. They might live forever.” – See more at: http://survivalbackpack.us/jellyfish-holds-key-immortality/#sthash.Dm0wojoj.dpuf

Like the new totems for the first two Moons, the Jellyfish has been imprinted in the fields of England. 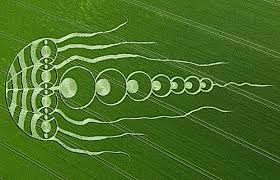 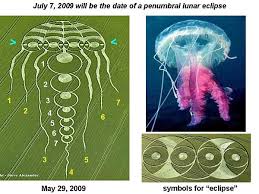 This Jellyfish Crop Circle appeared in England on 5/29/2009  D:  11 World-Bridger;  M: 2 Mirror.  Note the two sets of ‘7‘s   🙂
“At the ancient Maya city of Chichén Itzá, during the spring and fall equinoxes, the great pyramid of Kukulcán serves as a visual symbol of the day and night as the sun of the late afternoon creates the illusion of a snake creeping slowly down the northern staircase.  Each year tourists visit the site at the equinoxes in appreciation of Maya achievements in astronomy and their obsession with time and cycles of the heavens”