This Magic Turtle Day is coded by the Galactic Activation Portal that denotes the Galactic Mayan Mind Transmission known as GM108X.

This video by Milchevic  http://www.youtube.com/watchv=synWKolHNBY  includes the passage in ‘Cosmic History Chronicles II‘  [and mentions  Valum Votan’s ‘The Arcturus Probe‘ and ‘Earth Ascending‘] that describes the origin and meaning of GM108X.  The terma of the GM108X transmission is meant to direct Humanity towards the greater Galactic realm, via the Synchronic Codes, and it is mathematical in nature. 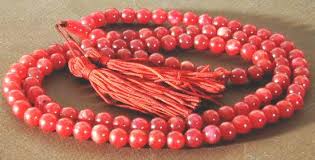 3 x 108 = 324, an anagram for our Earth 24.3,  which is the 3rd Planet out from our Sun, designated by the Galactic Mayans  as Star 24 in the Velatropa sector of our Galaxy.  Our Sun  has been very active during  the 4thSelf-Existing Cat Moon of Form. http://www.whatdoesitmean.com/index1813.htm

There was a mysterious,  “228 million kilometer (142 million mile) “plasma/electrical discharge” between the Sun and Mars  on 19 October“.    http://www.whatdoesitmean.com/index1813.htm

“Giant sunspot AR2192 has produced 27 C-class solar flares, 8 M-class flares, and 2 X-flares, and shows no signs of weakening.”  [As of the date of that article on Oct. 23rd]  The following day, the largest flare in 24 years occured:   “The biggest sunspot on the face of the sun in more than two decades unleashed a major flare on Friday (Oct. 24), the fourth intense solar storm from the active star in less than a week“.  24 hours later, “the huge sunspot fired a powerful X-class flare right at Earth. And we sure did feel its impact.  NEWS: Flare Alert: Monster Sunspot Turns Toward Earth“

Our attention was again directed beyond towards space on 10/28/14 when the Antares rocket, which was to deliver equipment and supplies including 1,360 pounds of food to  the International Space Station, exploded after takeoff.  Surprisingly, Antares was utilizing engines that were made in the late 1960 and early 1970s.  Here are the 5 men and one woman of Expedition 41, currently  on the

The failed Antares launch and the subsequent tragic loss of the Virgin Galactic Spacecraft and one of it’s pilots generated much attention and speculation.  Russia successfully launched a rocket to the ISS shortly after the Antares exploded.  Interesting to note  that “a mysterious “artifact” rushed to the International Space Station (ISS){was}  deemed so critical that identical copies of it were poised to launch from both the US and Russia space agencies this week.

Arguably the most prominent person on the Earth’s stage is a Russian. Last week,  President Vladimir Putin delivered what is being acclaimed as the best speech in 45 years!  English transcript is here:  http://vineyardsaker.blogspot.co.nz/2014/10/putins-speech-at-valdai-club-full.html   His training as a lawyer shined through.  One analyst wrote:   “This is a vision of Russia as the sheet anchor of the international system, acting together with its allies China and the other BRICS states to restrain the US where possible, rescuing the US from its follies whilst upholding international law, world order and stability”. 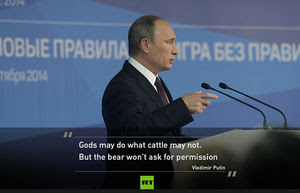 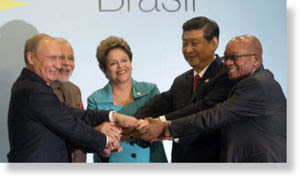 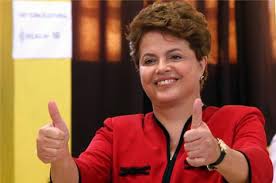 The Human Wavespell  ended with  a victory for the people of Brazil, when their female President, Dilma Rousseff  was re-elected.  She intends to strengthen Brazil’s ties with other BRICS nations, which will further increase the balance of power on Earth.  She once stated:  “My mission is to eradicate poverty“.

Mission happens to be the name of the kayak I use for enjoying Nelson’s beautiful bay.   While out on the ocean last Sunday, I realized that ‘mission‘ alpha-numerically equals 98:  Resonant Mirror.{which coded the last blog, and my next birthday}  The CGF [Complex Gematrical Frequency] is 368.  18.8 is its vigesimal, and the Kin Equivalent is 108:  Self-Existing Star, today’s Magic Turtle Day.    Just now noticed that the current promotion at Poker Stars is called “Mission Week”  🙂  During the Self-Existing Cat Moon, our ‘Mission‘ is to determine the Form our Service will take“.

The 9th  Magnetic Serpent  Wavespell of  began on the 13th day of the Self-Existing Moon which is coded by the  Serpent.  Today’s Mayan Kin:  9 Dragon combines with 4 Star to mirror that 9 and 13 {8.4 + 1.9 = 9.13} and the 9 Lords of Time, and the 13 feminine Oxlahuntiki.  The 9th Wavespell also marks our entry into the Blue Western Castle of  Transformation.

This Wavespell is coded by Kin 105, which always remind me of Pacal Votan;  Pacal Votan = 105 via the Simple Gematrical Frequency, while the Complex G.F. of Pacal also equals 105.

New Zealand also equals 105, and this week  marks 10 years since my arrival in New Zealand to pursue my perceived  ‘galactic mission‘.   After great expenditure of time, money and energy, the remaining  6 Galactic Activation Portals provide {a ‘Mission Week‘},  an opportunity for this Galactic Mirror to  determine  the ‘Form‘ of my future Service‘.

May we all find our unique way to make our Earth a happier, healthier and more harmonic world for all   🙂