Today we enter the GREEN CENTRAL CASTLE OF ENCHANTMENT

Court of the Matrix:  Synchronize Human
MOON GENESIS    and the

I unify in order to purify
attracting flow.
I seal the process of universal water
with the magnetic tone of purpose.
I am guided by my own power doubled.
The Noosphere Constant;  Kin 79:  1 Storm is today’s Challenge.  The Analog, 1 Dog codes the annual Wavespell of this year, which ends in 4 days.  The G-Force is 4 Storm, and the PSI is 7 Dog.  Long Count:  5 Dragon.
9.1:  “Hyperorganic evolution is the normalization of the practice of sensory teleportation.”

The 11 day  break from posting [caused by a varitey of technical issues] allowed me to consciously savour ‘my Birthday’s  Wavespell’ and to feel in closer touch with all of you, and with Spirit.  Heart-felt Thanks to each of you for holding this space so beautifully.

3 Mirror was a great day, including a Nelson waterfront birthday brunch, and  an evening meal at 13 Eagle’s ocean-front home in  Golden Bay.   Lee 1 World-Bridger [son of 12 Wizard and 4 Skywalker] baked a delicious cake, and 13 Eagle’s partner, Marsha 9 Eagle  made a Heart-shaped cake for Cosmic Silio 14  🙂

Next morning during breakfast [on 4 Storm, today’s G-Force] several of us  enjoyed a beautiful rainbow: 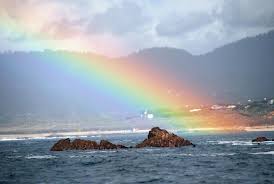 As we left the cafe, TMQ pointed out their double spiral welcome mat.  The next day, [day 3 of my 3 Mirror Ring]  TMQ saw three complete, very near and clear rainbows, about 90 minutes apart, during the Overtone Dog watch of   Overtone Sun. The 3 Rainbows were more vibrant and colorful than this, and were literally between me and the very near green hills  :): 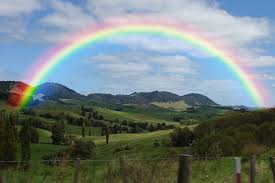 At the end of Overtone Sun, whose G-Force is Electric Mirror [on the 19th day of 13th Moon, [Gr. 7/13  :)], these crop circles appeared, bearing the image of the double spiral [reminiscent of  the Double Spiral in Golden Bay 🙂

These incredible rainbows and double spirals  bode well for the Rainbow Bridge and oUR Awakening of the  Seventh Lord of the Ring:  Single Wing Red Fire, coded by 5 Sun, and of his G-Force, 3 Mirror, the Heart Oracle of Supreme Golden Maiden.

It is auspicious for the completion of the Mystery of the Stone, that the 5th and 7th  Bolontiku are embodied by two persons who became known in the public sphere during this Seventh Solar Ring.  TMQ’s nephew Jud brought awareness to his kin, 5 Sun, when he appeared weekly on the Survivor Nicuagara show, and won!

The first words TMQ read in her Electric Mirror Ring were these by Melovia 12 Moon:  “I see the Beckham’s have just welcomed their own Supreme Golden Maiden

Now you have another Cosmic 14 and Mirror kin sister, Claire!”

This  Supreme Golden Maiden  [7 pds., 10 oz. on Gr. 7/10] chose parents of self-made‘royalty‘, and she  was ‘annointed‘ by ‘true Royalty’ when the future King and Queen of England chose to visit her city [of Angels] during her Birth.  William and Catherine specifically chose to be there for the birth of their friend’s 4th child.  This Electric Mirror’s mother, Victoria, sang one of the songs on the Princess Diana tribute album; perhaps this Birth ‘brings all full circle’  🙂

On the 5 Skywalker Day-out-of-Time, let’s Invoke the 7th Lord of the Ring:  Single Wing Red Fire.  He is the only Bolontiku to be Overtoned by the  Feminine Lord of Time, Supreme Golden Maiden.  Perhaps the Double Spiral crop circle on ‘their‘ day was a sign of the Equality, Resonance and ultimate Uniting of the Male and Feminine that will bring Peace and Spiritual Evolution.

Today is the 19th Vinal  of 5 days of Purification, which is called the Uayeb:

“All that is needed to obtain the precious stone”

Only 4 days remain of the 7 Years of the Mystery of the Stone.

From 4 Skywalker Eden Sky:  “The Vayeb is a time for purification on all levels – physically and spiritually, practically and mystically.  Follow your own intuition of how to observe this important cycle. During these final 5 days, let us integrate all this Red Overtone Moon Year has brought us into our hearts, that we may prepare to venture into a New Year!  The culminating day of the Vayeb is always The Day out of Time, July 25.”

Kin 213:  Red Overtone Skywalker
I empower in order to explore, commanding wakefulness.
I seal the output of space with the overtone tone of radiance.
I am guided by the power of birth.
This will be our first Day-out-of-Time without Valum Votan,  the man who taught us about this special day that ‘Overtones‘ the Solar Ring of 13 Moons.

Whether you observe this day with other kin, or not, know that the Closer of the Cycle is with us, especially as we are meditating the RAINBOW BRIDGE.

So much happened during this 7th year of the Mystery of the Stone, but considering that 3 almost-finished posts [for Kin 200, 203 and 207] were  lost, the momentous events of the Red Overtone Moon ring will be recapped in a later transmission.  The inability to post gave TMQ pause to think about the best way to “Serve” during her Electric Mirror ring.
Nearly daily blogs [663 posts] began on  H.P.Blavatsky’s solar birthday on Aug. 12, 2009 [Kin 21] and ended on TMQ’s 2011 solar birthday [the Kin 197 blog was posted in the morning of 198 here].
We’ll see what sort of Rhythm ensues during the Rhythmic Wizard Solar Ring  🙂
May PEACE,  JOY and LOVE PREVAIL in our HEARTS and EARTH  🙂
N. S.  1. 23. 13. 25.  Cube 19:  SELF-GENERATION RECHARGE  Kin 209